How I do my Computing 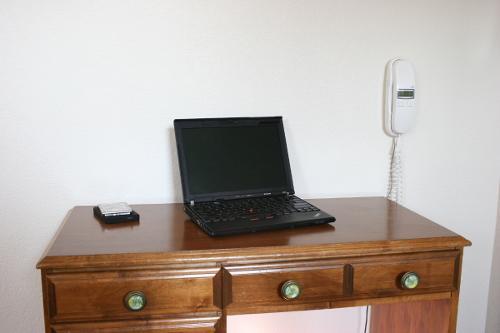 Update: See How I do my Computing: Part 2

Over the years, I’ve been asked why I use computers in the way that I do. To the hardcore Free Software enthusiast, my methods are probably borderline blasphemous. To the typical computer/Internet user, however, I hope to share something interesting that sparks curiosity.

This page was inspired by Richard Stallman's similar writeup. It is not endorsed by him. Also check out my friend Leah's post on this same topic.

The most powerful computational device I own, other than my brain, is a ThinkPad X200 laptop. Okay… I also own a few scientific calculators and a portable audio player (a Sansa Clip+ running Rockbox firmware), which are technically computers, but let’s not count those.

The ThinkPad X200 was released in 2008. My current X200 has 4GB RAM, and a Core 2 Duo processor… very low specs for 2018 (soon to be 2019 – happy new year). What makes this laptop special, is that it runs Libreboot for its initialization program. Libreboot is Free Software (Free as in Freedom) that is controlled by no one but me, the user. It runs the Debian GNU/Linux operating system, which is also entirely Free Software. Furthermore, all hardware, including the wireless card, use Free firmware. The result is a completely liberated laptop that respects the user, and does not answer to any proprietor. This is good for privacy, security, and most importantly, freedom.

What I use my computer for

I try to be a minimalist in every aspect of my life, which spills into my computer usage. In this world, we outsource so many of our brain’s basic functions to computers. Whether this is a good or bad thing remains a question that I will not attempt to answer here. I will say that I make a conscious effort (although I am not perfect) to only use computers for tasks that the human brain/body cannot do with at least minimal effort. For example, I cannot easily deliver a message across the country or world, so I will use e-mail to do that instead. On the other hand, my brain is perfectly capable of plotting a route on a paper map, so I will do that instead of using a computer in most cases.

My typical email client is Thunderbird with the Enigmail extension for sending GPG encrypted e-mail. Someday I may set up my own e-mail server, but for now I use Riseup.net. While I do not agree with all of their politics, they run an honest service that aims to protect freedom and privacy. Of course, check out any e-mail provider’s privacy policy and terms of service before trusting them with your data.

I occasionally use instant messaging. My protocol of choice is XMPP with OTR encryption. Since many people I associate with don't care to learn XMPP, I use signal-cli on occasion.

I use Lynks, a command line browser for accessing the Web. I route all traffic through a VPN. I sometimes use the Tor Browser for viewing more complex pages, although I am careful to keep javascript disabled unless I absolutely must use it.

I use LibreOffice for creating complex documents or spreadsheets, otherwise I prefer to use nano for editing text. I should probably learn to use GNU Emacs or Vim.

I try to avoid SaaS (software as a service). In other words, I would rather do my computing on a device I own rather than outsourcing to others. For example, editing documents on my own computer rather than using Google docs. However, this website is hosted on gitlab.com, rather than a server I control. In principal I do not care for this, but at least it does not violate my privacy since the site is public anyways. The same goes for my e-mail service, Riseup. I do not have control over their servers.

Firstly, cell phones are constantly pinging cell towers providing them with the user’s current location. While this is necessary for the phone’s functionality, it effectively turns every cell phone into a tracking device that keeps cell companies up-to-date with their user’s whereabouts. My personal choice is to not be tracked everywhere I go, thus I will not carry a cell phone.

A quick note on turning phones off… Technically it is possible for a cell phone to be tracked even when it is turned off or in airplane mode, although this appears to be more of a targeted type of attack. I believe it unlikely that most phones are being actively tracked while off or in airplane mode unless it has been infected with malware and targeted by a three letter agency. That being said, removing the phone’s battery(s) is the only way to be sure your phone is really turned off.

Location tracking is not the only reason I don’t carry a phone. When I leave the house, I do not wish to be available all of the time. I prefer to not have my day interrupted by a vibrating piece of plastic in my pocket. Over the years of not carrying a cell phone, I’ve found that most “emergencies” can wait.

Okay, I won’t lie. I do technically carry a cell phone... sometimes. It’s an old pre-paid flip phone with a few hours of talk time. I keep it in my bag when I ride my motorcycle in case I break down and need a tow. It has come in handy a few times. Of course, 99.9% of the time I do not use it, and I am careful to keep the battery removed.

Yes, I have a home phone! I get pretty excited about my home phone, even though it runs proprietary software and connects to Google Voice. What!? Google!? Caleb, you hypocrite! Yes, maybe that’s true, but allow me to explain.

While I will never recommend the use of proprietary software, and will most likely never recommend Google, it's a choice I made knowing well the drawbacks. Just know that this setup is free as in price, NOT freedom.

My actual phone is an ancient 90’s corded phone attached to an OBi200. The OBi200 is a device that connects an analogue phone to a VoIP service provider… in my case, Google Voice. Google Voice provides users with a telephone number which can place/receive free incoming and outgoing calls within the U.S. and Canada. This effectively provides me me with a zero cost home phone.

Let’s look at this from a privacy standpoint. Let’s say I was able to have a Free Software based phone system connected to an ethical phone provider. Would any of that really matter the moment I make a call to someone who uses AT&T, Verizon, etc? As soon as that call connects, my voice and the call’s metadata are under the control of whatever service provider I am calling. From a privacy standpoint, it effectively doesn’t matter what phone provider one uses as long as calls are made to similar providers.

Am I compromising my ideals by having this phone setup? Yes, perhaps. Does it violate my privacy any more than a different system would? Not likely, provided I make calls through the public telephone system anyways.

A note on social media

Although I do not use social media of any kind, I don’t have anything against the idea in principal. As long as the a platform respects its users in terms of privacy, and data portability, I see no real issue with social media usage.

That being said, major platforms like Facebook and Google+ practice the exploitation of their users for profit. This includes, but is certainly not limited to targeted advertising, in which the platform sells user data to advertisers who in turn display ads specifically targeted to individual groups of users. Facebook and Google (along with other companies) are also part of PRISM, an NSA spying program.

Another aspect of social media is its addictive nature. The major platforms are specifically designed to keep people using their apps and websites as long as possible. The more people use their sites, the more profit the platform gets. This feeds into the narcissism and overall discontentment many people experience as a result of social media usage. Constantly viewing the “best” of other people’s lives can cause depression and thus a compulsion to consume more social media.

In any case, there are ethical social media platforms out there such as Mastodon and GNU Social, but I personally have no use for them.